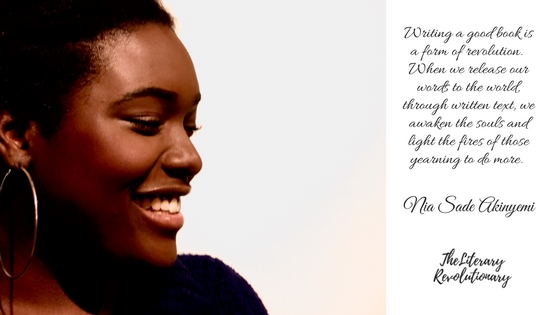 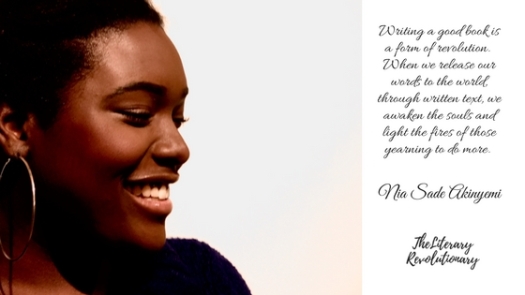 Any time a writer takes the courageous step to tell a story (fiction or non-fiction), it’s a revolutionary act. It’s an act of exposure. For writers or color, I think this is especially true. If we consider revolution to be about overhauling a culture or society or overturning the systems that hinder a culture or society from working at its best and most humane…then who does that better than the scribes who feel led to chronicle our stories? Writers have the capacity to expose the nuances and complexities of a culture and its people–good and bad–and shift how that group is seen, and maybe more significantly, how that group sees itself.

So much of the early work of Black writers had a revolutionary perspective. The issues of the day were laced as commentary in the creative work. That’s certainly changed some. And maybe that’s a good thing? There has always been this notion that Black writing, particularly here in America, had to SOLELY reflect or comment on the social issues and injustices of the day. If we look at the writing of the Harlem Renaissance and even decades later in the Black Arts Movement, that’s certainly true. We’re clear what Langston Hughes is speaking to in I, Too, Am America. But I think what’s interesting about these periods is that there were also writers across the diaspora telling the other stories of our lives. This is especially true in what might be considered the gap years (the time between the Harlem renaissance and the Black Arts movement; the Black Arts movement and the Contemporary resurgence Black writers in the early 1990s). In any case, there has always seemed to be a desire by some Black writers to tell the stories that exist outside of our social positions. Stories where the narrative is less about commenting on political or social challenges directly, and more about illuminating our humanity WITHIN these white supremacist power structures and institutions. But when I consider this…I realize that this too is revolutionary, right? To tell an “ordinary” story about a little Black girl doing cartwheels in a park…is, maybe sadly, revolutionary. To tell the story about a Black man who falls in love and loses said love and then falls in love again–and to tell it with no agenda, with no apparent consciousness of the “white gaze,” with no firm commitment to the pathologies of the hour—it’s all revolutionary.

And then I think there are some who have done/do both well. So yes there’s certainly social commentary that can be gleaned from Nella Larsen’s story “Passing” but, at it’s core, the story is about the complexities of a relationship between two women. Newsflash: Black people have families and jobs and romantic interests and hobbies and challenges and yes, we have all of this within systems not designed for us, and yet we exist. We live and love and die. Those institutions and structures don’t HAVE to be in the forefront of the stories we tell. But it’s also OK when they are.

Unfortunately, the issue that most Black writers who aspire to do this for a living must contend with is reconciling the work we want to do with the ways in which it’s received. This begs the question of whether we can ever truly be rid of the white gaze. Black stories and literature will always be critiqued through the lens of wherever Black people exist in society in that moment. Even by us. Alice Walker’s treatment of Black men in The Color Purple was critiqued heavily when it was first released in 1982 (and the movie in 1985) because people couldn’t see it as one story told by one author but as an indictment of all Black men…solely in light of the standing of black men in American society in that moment. Black folks felt the need to protect our own. And it could be said that the industries involved, may have sought to exploit it.

And yet, Alice Walker just told her story.

The elders in my family certainly were storytellers. I grew up in Louisville Kentucky. I used to sit and watch my aunts and uncles playing spades or pokeno and telling the tallest of tales. My nanny (great-grandmother) used to talk about growing up in Alabama and every time she’d tell the story, a little bit of it would change…which was always incentive for me to listen.

And that’s just it, right? Storytelling is revolutionary no matter (or even despite) the form it takes or the way it’s received. It moves us all. Once a piece is released into the wild, we can’t always determine what kind of moves will be made or the noise the work will make—that’s out of the writer’s control. But like the stories told by the old griots in the oral traditions, once it’s out there…it takes a life of its own. It transforms itself in the mind of the reader/listener.

I guess that’s why I’m fascinated by digital storytelling and the opportunity it affords Black writers and storytellers. It’s certainly not without critique but, in many ways, it replicates what is familiar about traditional storytelling. FB and Twitter allow for a kind of call and response. Internet Memes use humor and satire to make a point. Youtube allows for stories to be told and retold and shared and reshared. There’s a link there, I think.

Sometimes the revolution is not so grand though. It’s more personal. For me, the process of writing, of storytelling, can be very cathartic. I believe storytelling has the power to heal us collectively, yes, but also personally. Even interpersonally. Stories are the drivers of movements like #metoo and #timesup. It’s the literal “Me too, Sis. Me too, brother” embedded in stories that resonate with us that’s so powerful. It is the seed of courage.

Wednesday = New HeARTtalk Podcast Episode! In this episode, Tracey Michae’l talks with writer, producer, and artistic theologian, @alexusrhone, about the power of holding true to the enormity of our dreams and being willing to pivot in the name of writing a better story for our lives. Part of finding our authentic voices is understanding that one of the ways we heal is by removing the masks we’ve crafted. But we must trust ourselves enough to “lean into the wild.” This episode is the first of our Pivot Series. HeARTtalk is available on Apple, Spotify, Google Play, Podbean, and other podcast platforms. https://www.podbean.com/media/share/pb-jeva7-d178c4
It's Wednesday so you know what that means! A brand new episode of HeARTtalk with Tracey Michae'l! In this episode, @tmlgwriter enjoyed some real candid talk with @bridgebuildingwithangela about how #parenting, and #motherhood specifically, can be an act of creation, and how too often our own narratives impact the effectiveness of that important work. Podcast link in Bio. #hearttalkpodcast
Yes, we are still full! 👏🏾👏🏾👏🏾