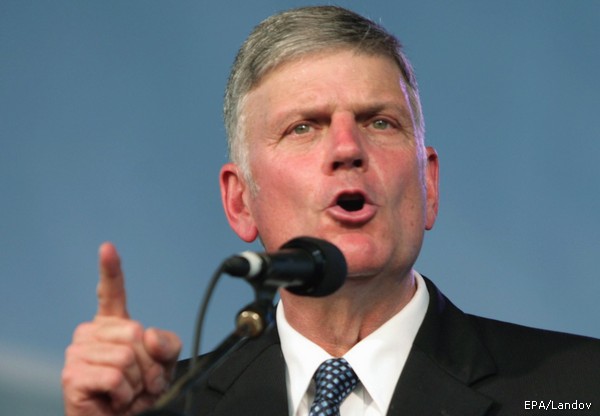 Whether you grew up in a Christian household or not, most people have heard of Billy Graham. For many believers, he was a Christian leader who taught the uncompromising word of God, a man who reached out to Christians and non-Christians alike to spread the love of Jesus. So we are outraged that his son, the keeper of his legacy, Franklin Graham, seems to believe that unconditional love is only reserved for Christians, Americans and our friends.

Graham, in response to the recent shootings at military facilities in Chattanooga, Tenn., posted this on his Facebook page:

Four innocent Marines (United States Marine Corps) killed and three others wounded in #‎Chattanooga yesterday including a policeman and another Marine—all by a radical Muslim whose family was allowed to immigrate to this country from Kuwait. We are under attack by Muslims at home and abroad. We should stop all immigration of Muslims to the U.S. until this threat with Islam has been settled. Every Muslim that comes into this country has the potential to be radicalized—and they do their killing to honor their religion and Muhammad. During World War 2, we didn’t allow Japanese to immigrate to America, nor did we allow Germans. Why are we allowing Muslims now? Do you agree? Let your Congressman know that we’ve got to put a stop to this and close the flood gates. Pray for the men and women who serve this nation in uniform, that God would protect them.

This position is not only un-Christian-like, it’s indicative of an insidious, ongoing movement to politicize Christianity. It also shows just how much leaders such as Graham have diverged from Christ’s teachings of grace, mercy and love for all of mankind.

To be absolutely clear...
We are grateful for the privilege to share our award recipients for the NSB Grocery Grant. The grant was awarded to writers in the metro Philadelphia area who experienced a loss of income because of COVID-19. Our hope and prayer is that this will alleviate, if for a short while, some of the challenges that come with being a creator in this strange and difficult season. CONGRATULATIONS!
As a small business made up of creatives, NewSeason Books and Media understands how challenging this time has been for other writers/storytellers. While our resources are limited, we wanted to do something to help. So as of today we are taking applications for the NSB Grocery Grant for writers in the metro Philadelphia area. The two writers awarded the grant will receive a $250 Instacart gift certificate. This will allow them to purchase groceries online and have them delivered to their home. The deadline for app submissions is April 30th. Awards will be made on May 6th. TO APPLY CLICK HERE: https://mailchi.mp/6f2bb76b0809/nsbgrocerygrant LINK IN BIO ALSO. If you are an individual or organization that would like to support additional grants above and beyond the two we are able to sponsor, please don’t hesitate to reach out to us. #doingourpart #togetherathome #artistsgrants #COVID19grants