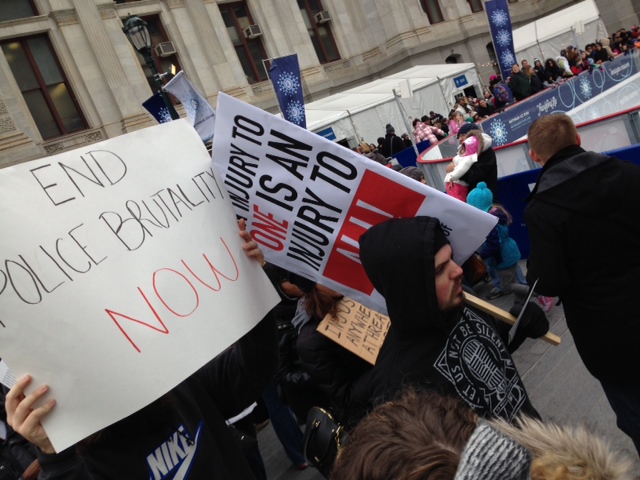 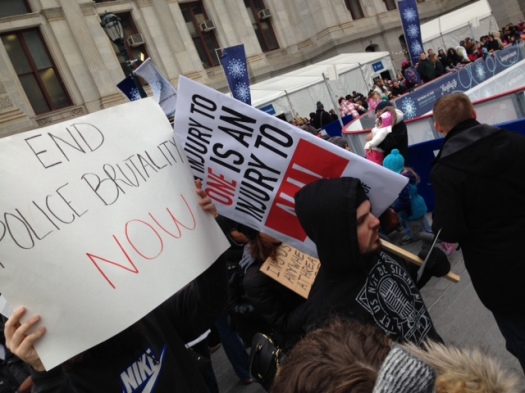 So I really wanted to go to DC or NYC for one of the marches for justice that were happening across the country this past weekend–had actually planned to go to DC all week long–but the kid was sick (fever, snot and such) and in a battle between my mommy-self and my activist-self, mommy usually wins. That’s a truth I have yet to unpack.  Anyway, in lieu of a trip to DC, I chose to participate in a protest right here in Philly. Here are some of my chronicles of that experience:

2:05 – So I’m headed to the protest. Sitting on the train at the 69th street EL/Subway station waiting to be shuttled to City Hall. I feel strange. A weird mix of anxiety and calm. I’m watching all these people on the platform. Black folks with bags. For some reason, I just see their bags and I know there’s a metaphor in there somewhere. I suppose they’ve just gone Christmas shopping. Black and Brown folks with bags and backpacks and headphones. Carrying bags and not listening to anything out here. Yeah, there’s definitely a metaphor in there. “Leave it alone, Imani!” A mom has just yelled at her girl child who keeps fiddling with a bag under the stroller. Been there before. There are white folks wandering around the platform. The same white folks I just saw in the station, trying to figure out how to use the token machine. They are obviously going to the protest. Had to be. I know it’s wrong to make that generalization. Stereotype them. But they look lost. Like they’ve never been on the EL before but someone told them this was the best way to get to City Hall without the drama of parking and blocked streets. I mean, honestly, that’s why I’m on the train. Lol. I don’t know why that’s funny to me. But I’m right, you know. The strawberry blonde just asked, “Is this the train to City Hall?” LOL. I told her yes.  I guess I looked safe. I wonder why she didn’t ask ole boy with the Beats by Dre headphones on and the sagging skinny jeans. Wait a minute…uhh yep, they are sagging skinny jeans. SMH.

2:17pm – The train is moving. Won’t take long now. 46th street station. For non-Philly folks who will read this, I’m on a train that runs from Upper Darby (an alleged suburb right outside of the city) through West Philadelphia, a predominately African-American community that somehow magically diversifies around 40th street because of UPenn and Drexel. A mother and son are nearby. I’m staring at them but not weirdly or anything. Just in the way you can get away with on the subway. I can’t help but to think of Michael Brown and his mom. Tamir Rice and his mom. Kind of clarifies things for me.

2:24 – 30th street station. The woman in front of me with deep gray locks and beautiful, brown skin is getting off. I’m disappointed. It’s taking everything in me to not scream out, “No! Come back! It’s just one more stop. You can stand with me. I’ll stand with you.” But I’m not going to do that. I don’t know what she has to do today. I only know what I have to do. But I do wish that these were one and the same.

2:31 – I don’t see anyone. I’m standing on the north side of City hall and no one is here. Am I late? Was it only for a half hour? Impossible! No protest. No group. Nothing. I’m devastated. Do Black Lives Matter? I can’t tell. Not yet. Maybe I’ll wait. I want to cry.

As I waited to see if folks would show up, I took pictures of all the goings-on happening inside and outside of the City Hall courtyard. Folks ice skating, shopping, laughing, taking pictures by the big Christmas tree. Sure, I know life doesn’t, shouldn’t, better not stop because of what’s happening. I understand that intellectually, even spiritually. But it’s hard for my heart, my flesh to process this. And I found it very telling that in the place where there should have been thousands of people protesting injustice (see NYC and DC), there was…well, oblivion. That’s how I saw it.

And then there was this: A high school chorus singing “I Had Christmas Down in Africa.” You can’t see it in the picture but the only two black girls in the group were dancing, arms linked, in front of the all-white chorus as a mostly white audience looked on.

I wanted to cry.

2:55 – We’re walking silently around City Hall. Well, except for me speaking in my phone’s audio recorder, there’s silence. Many are holding up signs and placards that say, “Black Lives Matter” and “White Silence = Violence” and other quotes and phrases. Others, including me, are passing out these postcards that on one side have the name of an unarmed Black man or woman who was killed by police and, on the other side, has the details of their case. These are mine. 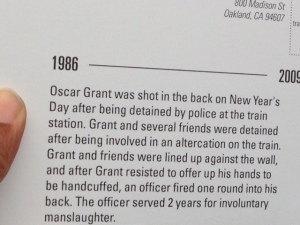 3:01pm – We are walking through crowds of people who are laughing and ice skating, etc. You can feel the discomfort settling over them like a cloud. But I’m sad because that cloud seems to dissipate as soon as we pass—as though we were never there, as though our signs and placards are just a brief, tolerable annoyance. I want to cry. I feel impotent. As impotent as I felt sitting at home, behind my laptop, writing my article and blogs but wanting to do more. We are such a small group (Observation: at least 60% of this group are white college students). The population of the metro Philly area is in the millions (and 40% African American). *heavy sigh*

3:11 – We are still walking. We are being led slowly around the perimeter of the City Hall circle, weaving in and out of the courtyard, by a young brother—I believe he’s a Temple student. He’s wearing all white, with a list of all the murdered on his shirt. He has a mirror covering his face like a mask. I suppose he likes metaphors and symbolism too.

3:21 – Someone, a curly-haired white guy, maybe Greek, has just suggested that we do a die-in in the middle of the City Hall courtyard. “Fan out, let’s take up as much of the space as possible,” they are saying. I’m not sure how I feel about this. I want it to mean more. I guess I will settle for it meaning something. On the count of three…

As I laid on the ground, I watched the clouds move quickly across the sky. It felt like they were rushing. Like they too wanted to get out of there as fast as those tourists and shoppers did after we fell. I stared at the statue of an eagle that jutted out from the side of this 140 year old building. America’s symbol of freedom and yet there I was, on the ground, asking for accountability, wondering if the seed of racism and white supremacy is planted too deep for people of color to ever truly be valued in this country. More than symbolism this time, it was irony, this eagle. One I couldn’t ignore.

“Mommy, what are they doing?” small kids said.

“Thanks a lot for ruining my holiday,” a woman’s voice said.

I was uncomfortable. I was cold. The subway rumbled underneath me.  Several times I wanted to get up. Several times I wanted to say, “Are we done?” Then something shifted in me. I resisted my urge for comfort. So many of my ancestors endured dogs and water-hoses and lynchings…yet, they pressed on. Michael Brown laid in the street for four and half hours. He didn’t get a chance to say, “Am I done? Is it over?” Eric Garner’s last words were “I can’t breathe!” so I dare not say “But I’m cold!”

My heart was heavy though. Because people walked pass and over us. Because of the Christmas music in the background. “All I want for Christmas…”

4:08 – I’m on the train back to my car. It’s packed on here. Blacks and Browns and Whites and others, going about their lives. In my haughtiness, in a moment of pseudo-righteousness, I want to judge them. I want to say, “Wake up!” I want to scream, “Don’t you see?! There has to be more of us to make a difference!”

As soon as I thought this, something like emotional lightning struck my heart. It occurred to me that maybe I’d gotten it wrong. Maybe they weren’t the ones who were asleep. Maybe they were the ones who were wide awake and I was asleep. They’d very clearly looked at the circumstance and decided on apathy and hopelessness. But I was still dreaming. Some of us are still dreaming. Because I want to say that the two hours I spent outside with those kids mattered. That, to a certain extent, just the idea of being out there (there goes that symbolism), will change one or two hearts. One or two hearts who will then change another one or two hearts and so on. Maybe they will pick up one of those postcards and read the name Oscar Grant or Jordan Baker or Tamir Rice and have a total shift in their thinking.

I keep talking about this heart thing because I think that’s totally it. Until the hearts of people change, until there’s a shift at the soul level, I don’t know if authentic change can happen. You can legislate behavior but not beliefs.

Yet, I will try. If writing and protesting and “dying-in” can facilitate that happening, if these acts can be the vessels of awareness that God uses to allow that to happen, then it can’t hurt to try. And because I know that “we wrestle not against flesh and blood but against principalities, against powers, against the rulers of the darkness of this world, against spiritual wickedness in high places,” (Eph 6:12) I will continue to pray.

We must use ALL the weapons at our disposal.

3 Replies to “People Say That I’m a Dreamer: My Journey to a Protest”

It's Wednesday so you know what that means! A brand new episode of HeARTtalk with Tracey Michae'l! In this episode, @tmlgwriter enjoyed some real candid talk with @bridgebuildingwithangela about how #parenting, and #motherhood specifically, can be an act of creation, and how too often our own narratives impact the effectiveness of that important work. Podcast link in Bio. #hearttalkpodcast
Yes, we are still full! 👏🏾👏🏾👏🏾
Philly area press, NewSeason Books and Media, is so incredibly proud to announce that our book, “Letters to the Finishers (who struggle to finish)” by @can.wil was just nominated for an NAACP IMAGE AWARD! @naacpimageawards NSB was started with the hope and vision of it being a place where writers and #creators can tell the stories of their heart. Where everyone’s journey is a worthy one. And while we don’t write and create for awards, we cannot deny that it feels good to be acknowledged. Candace, we are so proud of you. Thank you, Shonell Bacon, for being an amazing editor on this project! You've served NSB graciously practically from the beginning! FYI: Listen to episode 2 of our podcast, HeARTtalk with @tmlgwriter to hear Candace talk more about the book. Available wherever you get your pods.