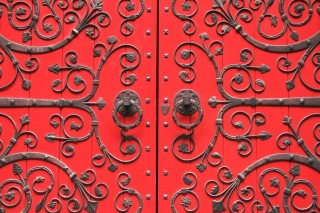 So when you buy a house that’s 85 years old, it’s inevitable that you will spend a good portion of the first few years fixing, replacing, or renovating stuff. The joy in it being that you can retain the charm of the past yet make the place your own via updates. Hubby and I are in our third year of owning our home (built in the 1930’s) and just like the previous two years, we’ve recently been doing some renovations. A little over two months ago, we had some windows replaced and got a new entry door. It’s a pretty cool door if I do say so myself, complete with an arched window made of leaded glass and cherry red paint (because every front door should be red, right?) I certainly love our new door but there’s someone else in our home who seems completely taken by it.
Every time we open the door and my daughter, MaKayla, sees the pristine, bright red color…she screams out, “PWETTY!!”
And when I say every time…I mean every. single. time.
The first day she saw it, “PWETTY!”
The second day she saw it, “PWETTY!”
Three weeks later, “PWETTY!”
Two months later, “PWETTY!”
Each day we step out the door, my baby girl notices the beautiful red door. After a while, it had started to wear on me. I found myself saying in the driest of voices, “Yes, Kayla. It’s pretty. Uh huh. Pretty.” Her response to my pacification? With just as much enthusiasm as the first time, “Mommy…PWETTY!”
Then, of course, God intervened.
“Are you too busy, too distracted to acknowledge beauty EVERY time you see it?
Uhh…
“Is there not value in being present enough to see the wonders before you…even if they are the same wonders you’ve seen over and over again? In fact, Isn’t that not wonderful in and of itself?”
*drops head*
I tell you, if there is one thing I’ve learned about being a mother it’s that my child is not just a reflection of me…an elevated version of myself and her dad, as I like to say. She is often the vessel through which God will reveal where I’ve gotten WAY off track. That is, IF I’m paying attention.So now when I step outside the door, I say, “Look Kayla, PWETTY!”
And of course, now that I got the lesson, she shrugs and points at a butterfly. LOL!
**
How has God used your children to show you yourself?
TMLG
Check out more at http://www.traceymlewis.com

One Reply to “Seeing the “Pwetty””