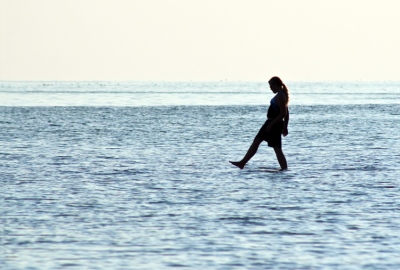 I experienced both great losses and awesome victories in 2012. However, the one thing that was constant for me was God’s faithfulness through it all. Now that I’m ankle deep in 2013, I feel like it’s time for me to return to God the favor for real, for real. I have the sneaking suspicion that this is going to be a water-walking kind of year. A year of growth for me in the areas of faith and trust. Given this, I thought it would be a good idea to examine the scripture passage that best describes what God wants from me (and maybe you if you’re reading this) this year.
Matthew 14:22-33 reads:
Immediately Jesus made the disciples get into the boat and go on ahead of him to the other side, while he dismissed the crowd. After he had dismissed them, he went up on a mountainside by himself to pray. Later that night, he was there alone, and the boat was already a considerable distance from land, buffeted by the waves because the wind was against it.
Shortly before dawn Jesus went out to them, walking on the lake. When the disciples saw him walking on the lake, they were terrified. “It’s a ghost,” they said, and cried out in fear.
But Jesus immediately said to them: “Take courage! It is I. Don’t be afraid.”
“Lord, if it’s you,” Peter replied, “tell me to come to you on the water.”
“Come,” he said. Then Peter got down out of the boat, walked on the water and came toward Jesus. But when he saw the wind, he was afraid and, beginning to sink, cried out, “Lord, save me!” Immediately Jesus reached out his hand and caught him. “You of little faith,” he said, “why did you doubt?” And when they climbed into the boat, the wind died down. Then those who were in the boat worshiped him, saying, “Truly you are the Son of God.”
I’m only going to focus on the highlighted portion of this passage today.

Lesson #1 – Yes, Jesus will sometimes SEND you into a storm.

When I first read this passage, I got stuck on the first sentence. Of course I’d read this many times before but this was the first time I’d really paid attention to this:
“Immediately Jesus made the disciples get into the boat and go on ahead of him to the other side.”
Made the disciples.
I have to say, I find it absolutely fascinating that Jesus would make the disciples get in the boat and go across the lake. I’m going to assume that Jesus knew the wind was kicking up on the water. How interesting is it then that He tells the disciples…who are, I suppose, clueless about what’s going on…to sail out IN THE DIRECTION of the storm. Obviously, He had a different kind of teaching to do.
I’m a firm believer that conflict builds character. I believe the tension, pain, and struggle I’ve experienced in my life is the fuel that God uses to make me stronger. But of course, that sounds all good in a catchy pop song (Love Kelly Clarkson) or popular cliche’ (What doesn’t kill you…) But when stuff starts to get real in my life, I’m saying, “Forget being strong!” LOL! I’m often looking around to figure out how I can get out of the situation as quickly as possible. The truth is, I don’t feel strong when I’m stuck in the middle of a storm. Not. at. all. And *let me my halo off* I’m also quick to look for something or someone to blame for my predicament.
God: Right here. Put the blame on me.
What?!
Oh and I’m not beyond whining, by the way. There have been many times when I have questioned God. Because of course, I’m omniscient and omnipotent and can see the end from the beginning (sarcasm). How many times have you thought or even said, “Lord, You knew what was coming down the road for me, why did You “let me” walk right into the mess, storm, whatever? Worse, why didn’t you just stop the winds and waves altogether?”
God: Because it’s in the storm that I will show you who I’ve made you to be.
No wind and waves = No water-walking.
As Peter found out, Jesus will sometimes send His followers into a life storm for the sole purpose of showing us something miraculous about Him and ourselves (Click Here to Tweet this). I can’t imagine that Peter was ever the same after walking with Jesus on the water…even despite his momentary distraction. I’m certain I wouldn’t be. Something changes when you see God do something in your life that only He can do.
Of course for Peter, the other disciples and us…this whole thing was all a set-up. Most storms are, you know. Storms (tough times, rough roads, struggles, trials, whatever you wanna call them) often set us up for total dependence on God. And like the Daddy he is, He loves when his kids swing on his arm, trusting that he won’t let them go even when the swinging feels kinda scary. In fact, if we recognize what’s going on relatively quickly, we can shift our reliance from our circumstance…which is usually our focus in the beginning (What’s going on? Why me? How can I fix it?)…to the One who controls every circumstance. Yes, we might get wet. Yes, our boats might get rocked. Yes, we might even be scared. But all that is usually a set up for a magnificent lesson in water-walking with Jesus (i.e., putting your absolute faith and trust in Him.)
So from now on, I think I’ll consider my windy days as faith-building exercises. Or miracle-makers. What about you?
TMLG
Next Lesson: Don’t let people reason away your miracles.
Check out more at http://www.traceymlewis.com